The “Voice” Of Lake Jovita Gets A Facelift 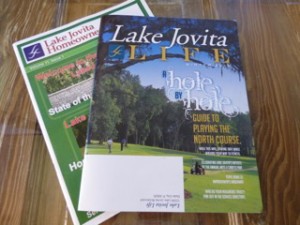 This is an inspiring story of a community newsletter that has come of age – and of me returning to my academic roots. I earned my Bachelor of Journalism from the University of Missouri in 1984 with a specialty in magazine editorial and graphic design.  While I’ve done a lot of feature writing over the years, I have not had the opportunity to be editor of a magazine since On The Green in Plantation, Florida back in 1985.  Earlier this year, some 32 years later, the Lake Jovita Homeowners’ Association replaced the Homeowner News with Lake Jovita Life, and named me its Editor-in-Chief.  After the release of the first two quarterly issues, the publication is proving to take on a life all its own.  New advertisers are gracing its pages, and stories are being picked up on our blog for publication outside of the community’s manned entry gates.

I’ve been a feature writer for this publication for the past three years, when it was a homegrown newsletter that served its residents well. But my dream was always to turn it into a more journalistic endeavor, offering up not only news within the community’s gates, but features that affect residents in the surrounding towns and cities. I knew it had the potential to rival any lifestyle publication in Tampa Bay, and as its editor my first priority was to elevate not only content but its design.  After all, Lake Jovita is a upscale golf and country club community that boasts two of the best golf courses in the Southeast, and the largest elevation change of any course in Florida.  Home values are rising nearly double the rate of other communities in Tampa Bay. Lake Jovita was more than ready for prime time with a magazine that reflected its quality.

I paired up with my go-to for anything editorial, Eric Beatty of Jacksonville-based The Design Lounge and International Creative Director for Swisher International, for this effort.  Together, Eric and I have worked for such notable publications as Florida Trend, Ponte Vedra Life and Cigar Afficianado to name a few.

The first issue after the reinvention was released in February of this year, with a hole-by-hole description for playing the North Course as its cover story. When it hit the mailbox, residents Bill and Cee Cee Reed emailed this:

“What a “beyond fabulous” publication. We enjoyed it so much! We commend and salute you in your pursuit of excellence within our beautiful Lake Jovita community!”

When the Spring/Summer issue arrived, it featured the wildly popular sport of Pickelball, and further cemented the HOA’s commitment to creating a publication that truly reflects the quality and style of the community.

“I was blown away by issue number one and then the second issue was even better. I can’t wait to see what the Fall issue brings,” said Jean Larkin Weightman.

“Our goal has always been to provide information the residents need to know in an entertaining way,” said Donna Clark, Lake Jovita’s HOA/Community Liaison. “The response has been incredibly positive, and we’re happy to be able to bring this magazine to our residents.”

As I prepare to complete the content for the Fall issue, I’m very cognizant of the fact that this rebirth is more proof that good design gets noticed—whether it’s for a community, a business or a personal brand.

The Fall issue, now underway, will be released in early September and will feature Pro Tips for Playing the South Course, Healthy Options, a look at Dade City’s vibrant healthcare climate, and The Event Planner’s Guide To Lake Jovita–how-to tips for getting the most out of their fantastic venue. The cover story will be Meet the Sisters Of The Holy Name Priory, a feature on the history and future of the Benedictine sisters of Saint Leo University. There will also be a story entitled Getting In The Swing, a feature on the Tennis Center and pro Bobby Gillespie. The Service Directory, where residents recommend service providers, is also included in this upcoming issue. If you think an ad to this affluent audience might be a good fit for your company, give me a call or drop me an email.

I’m confident that the Fall issue will continue this upward trend, and am forever grateful to be able to bring a publication of this caliber to the wonderful residents of Lake Jovita.