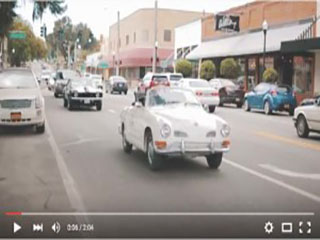 n 2012, there was an hour of YouTube videos uploaded very second. By 2013, 72 hours of online video was uploaded every minute, up by 12 hours each minute over the previous year, according to Fast Company and Forbes.

When trying to reach a millennial market, video falls into that sweet spot for a generation of T.V. watchers – those who are used to entertainment on screen in an episodic fashion and those who are moving toward YouTube version using Google when seeking entertainment, information or news.

By 2017, video will account for 68 percent of all consumer Internet traffic, according to Cisco Networks. Video-on-demand traffic alone will have almost trebled over the last five years. When it comes to potential reach, video is peerless. YouTube receives more than one billion unique visitors every month, which is more than any other channel, apart from Facebook. That made video the perfect medium to employ in the rebranding of Dade City, Florida on behalf of the Dade City Merchants Association, the City of Dade City and the Greater Dade City Chamber of Commerce.

The video campaign, entitled “Authentic Dade City. Good Vibes. Great Future.,” was recently unveiled in an effort to draw a younger, affluent demographic to this historic, Old Florida town with its sites set on the future. Teaming up with Tampa-based Diamond View Studios and Morrisound Studios, our team was able to shoot 57 locations in just two days, using five cameras, two drones, a custom sound track, and seven cinematographers and producers, resulting in a two-minute video that encapsulates life, work and fun in this iconic Florida town.

It was our pleasure to hold a mirror up to the city and capture this experience in real time, and create a moving snapshot of life, work, play, shopping and dining in the greater Dade City area. Click on the image below to see the video:

The two-minute video was then split into five Public Service Announcements (PSAs), that will be marketed to local broadcast and cable affiliates. But why now? Because Dade City was ready, and the time was ripe to spread the good news about what this community offers. Nothing is as powerful as video for reaching the Millennial marketing, and few mediums can captivate and motivate a market like imagery that defines an experience. The City of Dade City, the Chamber and the Merchants Association will all be uploading this video to their respective YouTube channels and posting it on their websites as well. To compliment the campaign, a 4 x 9” trifold was printed so that shopkeepers and restaurants can distribute them to customers, in an effort to keep Dade City top-of-mind after their visit.

So next time you want to make a big impact, think video. It’s the most memorable way to tell a more thorough story in a short of amount of time, and craft a message that remains with the viewer long after the video has played.