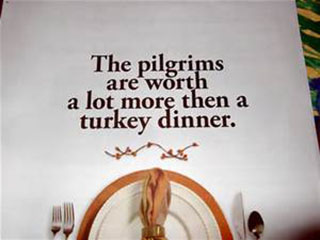 This is a question I’ve been asked many times over in my career.  Grammar in advertising is a double-edged sword.  You need to know the rules to avoid the $52,000 mistake The History Channel made recently in their full-page New York Times ad for a Thanksgiving special.  The difference between then and than cost both the company and the ad team dearly.

Yet, some of the most famous marketing phrases in advertising have nothing to do with good grammar, syntax or even punctuation.  Bottom line?  Good grammar does not equal perfect communication.

Now I can hear the collective feathers bristling already out there among my blog readership, but hear me out.  A business letter needs to be well crafted and correct.  A business plan needs to impress both the accountant and the wordsmith in any banker.  But a good headline can break all the rules.  A powerful slogan can transcend the perfectly good, yet uninspiring grammatical clutter we all encounter in our daily lives.  Here are a few examples:

Got Milk?  It’s a grammatical train wreck to be sure, but what if the National Dairy Council used “Do You Have Milk?”  That would have been milk toast indeed compared to the punch of what has become an iconic two-word campaign.

The Few.  The Proud.  The Marines.  The grammar police were quaking in their boots when the USMC decided to put three two-word sentences back to back (to back?).   But it works.  Why? Because it feels right.

However, there’s a big difference between clever and sloppy.

In SodaStream’s recent SuperBowl spot starring Scarlett Johansson, she enthusiastically said, “less sugar, less bottles,” when it should have been “fewer bottles.”  Victoria’s Secret forgot their grammatical common sense in last year’s Secret Body campaign when it touted, “You’ve never seen body’s like this!”  Argh. There’s way too much wrong with that sentence to even get me started.  How about McDonald’s and Hardee’s both singing the praises of the new “anus burger” on short-lived promotional posters and a Days Inn location advertising “free wife” instead of free Wi-Fi?  Even President Obama’s reelection campaign, fueled by a billion-dollar budget, apparently couldn’t afford proofreaders when it ran a banner ad that read, “We’ve come along way” instead of “a long way.”

Of course, none of us are typo free and mistakes happen.  I’ll be the first to admit I’ve made some doozies in my time (pubic instead of public relations in a PR plan for instance – I can still hear the account exec falling out of his chair from laughter). But when the mistake is intentional and the result is a stronger brand, then it works.

The key is to write to your audience, not your English teacher.   Never impose your perfect grasp of the language on anyone you want to forge a bond with.  It just makes you sound pompous and out of touch.  The quickest, easiest route to the mind of the consumer is through an honest, understandable, easily digestible conversation on their terms, in their vernacular.

Of course, you need to know the rules before you can break them.  Better yet, just leave it in the hands of a good copywriter.  We know when and where to bend the rules to your best advantage.  We got this.