Everything Old Is New Again With Social Media. 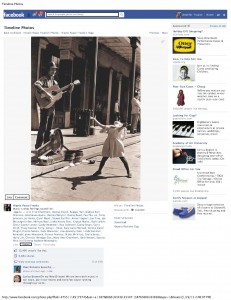 Last year for my 50th birthday, I was presented with a gift I adore – a signed black and white print called Tiny Dancer from Tampa-based photographer David Henry Williams. Of course, I love this gift. The music this little girl was listening to didn’t just flow to her ears.  It flowed to her very soul.

But let’s step back and look at its origins, and its rebirth. The year was 1982.  Three competitive photography students from the University of Southern Mississippi headed out to New Orleans to fulfill an assignment and capture the perfect study in shadow.  David saw a contrast in light and shadow and snapped the shot directly across from the famed Café Du Monde on Decatur Street, beating his classmates to the punch.  Little did he know at the time that his photograph entitled Tiny Dancer would not only earn him an “A” but would become a social media darling more than 30 years later.

“I’ll never forget the moment,” recalls Williams.  “All I saw was the shadow, and waited for the decisive moment.  Once I was printing the image, I realized there was so much more to the shot.  Her father was singing Stevie Wonder’s ‘You Are The Sunshine Of My Life’ and this little girl in tap shoes danced with pure joy.”

Over the years, Williams has sold the image dozens of times – sometimes as a print, sometimes as a giclee – in places like Cat Head Delta Blues & Folk Art’s gallery and via his website.  The image gained further notoriety when donated as a silent auction item for a fundraiser for Katrina Relief, and again when copies were sold to buyers in Las Vegas, and yet again when the print was exhibited at the Tampa Museum of Art at their Art After Dark exhibit.

Recently, the image appeared on a Facebook page called Hippie Peace Freaks, an anonymous community page launched on March 26, 2012 that currently has 5,471 fans.  On January 22, 2013, this post appeared: “Music is what feelings sound like” along with Tiny Dancer.  Within days it had garnered 12,466 likes and was shared 9,084 times by Facebook users around the globe, and the likes and shares keep climbing.  It was fun to recently see a post of Tiny Dancer – my favorite picture on my wall –  on my Facebook page from Barcelona, Spain.

“It’s definitely a photography I’m proud of,” said Williams.  “The fact that it’s still fresh these many years later is pretty cool.”

And that’s the beauty of social media.  Stories can spread like wildfire and give new momentum to art and ideas that may be decades old.  So if you’re not out there in the blogosphere or active in social media, you may want to rethink your hesitancy.  The payoff can be big, even years after the fact.