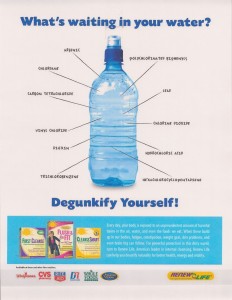 When an ad exec added one word to directional copy on shampoo bottles, it doubled shampoo sales overnight.  Of course, this was in the 1950s – the era of Brylcream and once or twice weekly hair washing – so people probably did require two washes and rinses to get rid of the built up goo in their hair.

But those four words demonstrate how marketing doesn’t just build brand or change perceptions.  Good marketing changes behavior.  These four words (or sometimes three when the phrase is simply “rinse, lather, repeat”) also demonstrate how effective calls to action can spur sales.  Taken to its extreme, and if followed to the letter, we would wash and repeat until there was no more shampoo in the bottle.  Of course, that didn’t happen, and the intended action became a hygiene mainstay in showers and bathtubs around the world until fairly recently when people began to realize that daily hair washing doesn’t require repetition.

The thing that strikes me most about this phrase as a writer is that something that sounds so simple can be so quickly and easily embraced – even when the desired action is more complex than simply washing your locks.

Take, for instance, a recent campaign for Palm Harbor, Florida-based Renew Life.  Renew Life is one of the world’s largest digestive care companies.  And while more people than ever know the term “probiotic” and what that means, it still requires a bit of education to help people understand why digestive health is so important to overall health.  I felt the campaign needed one word that describes exactly what digestive cleansing does, then the copy and imagery supported why we need to rid our bodies of toxins.  Degunkify was a phrase I coined because it said quickly and effectively “get the gunk out of your body.”  It’s also a call to action, which in my opinion, makes for the most powerful form of advertising.  This campaign helped open people’s eyes to the fact that toxins are all around us, in the air we breathe, the food we eat, even the bottled water we drink.

According to Bonnie Cooper, marketing director for ReNew Life, the campaign was well received by health food stores.  It ran in Delicious Living, Taste for Life, and Better Nutrition through the fall of 2010.

“One of the publications actually got a cease and desist from an agriculture group because they thought we made it sound like eating vegetables was unhealthy,” said Cooper.  “We ran it anyway until its flight was over with good results.”